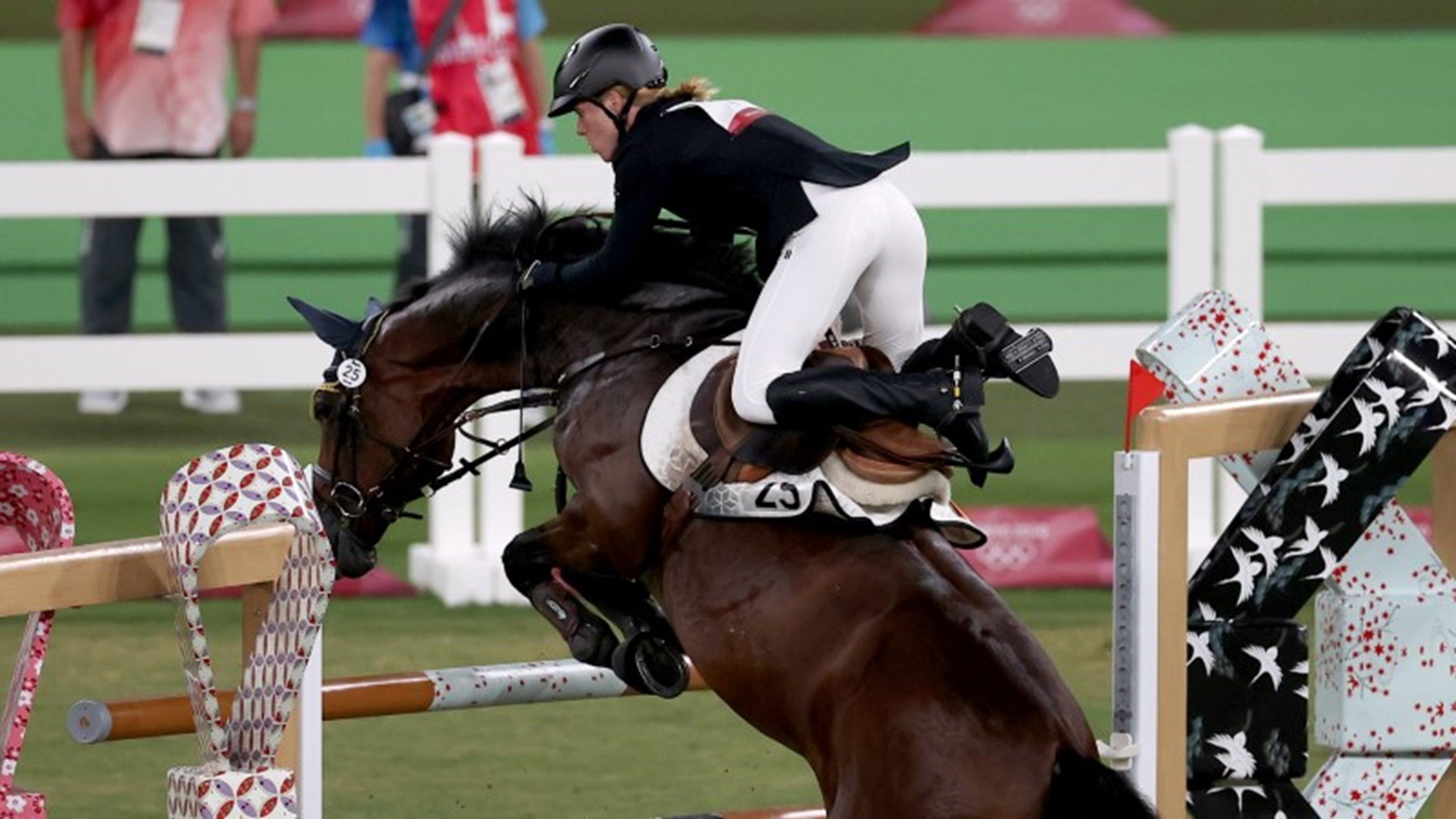 Want to listen to this blog instead?
Listen in the Horse Happening Podcast, with Lindsey Partridge

There has been some controversy swirly around about the show jumping portion of the Olympic Pentathlon, specifically with Annika Schley and her mount St. Boy. For those of you who did not see this chain of events, it was an epic disaster. Some called it a real-life nightmare during the commentary. You can view my YouTube channel for footage of the actual round https://www.youtube.com/watch?v=1JJRzRW5PpE.

There is quite a bit of controversy and many arguments surrounding the professionalism and integrity of the Pentathlon. For those of you who don’t know what a Pentathlon is, a Pentathlon is an Olympic sport that comprises of five different events: fencing (one-touch épée), freestyle swimming (200 m), equestrian show jumping (15 jumps), and a final combined event of pistol shooting and cross country running (3200 m).
-https://en.wikipedia.org/wiki/Modern_pentathlon

Annika Schleu placed fourth in the previous Olympics, and this year was her time to shine. And shining was what she did up until the show jumping portion. After the fencing portion, she had 274 points, which was 30 points above the 2nd place competitor with 240 points. From there she went on to swimming, and again she destroyed the swimming, finishing with 277 points to bring her to a total of 551 points, leading by 54 points. That big of lead has never been heard of heading into the Equestrian event.

That soon came to an end as she finished up her jumping round with zero points. So, at this point, she was not even a contender and fell to 31st place out of 36 riders; she went from being in gold with a huge lead to dropping down to 31st place. What we see in the video footage is Annika making her way to the first fence, jumps it sloppy but clear. She manages to get over a couple more jumps, but they are also not good. They then came to a jump near the out gate, and the horse puts on the brakes and says, no, not today. However, these riders do not bring their horses, they get assigned a horse randomly through a draw process. The kicker is they only get 20 minutes to familiarize themselves with the horse before going into the ring. Each horse rides the course twice, with two different riders with a little break in between each ride. Now going back to this horse St Boy, he has already been in the ring with a different rider. This can either be good or bad, but in this case, it was bad. The very first fence, the rider gets into deep, rider pulls on his face, their legs swing back and kicks him, and he hits the rail, not a very good opening jump. The horse and rider combination continue to make a few decent jumps but as she continues to pull on him the horse puts on the brakes and stops and refusing to continue, which results in them being eliminated. So right there that does not set things up well for Annika who’s now got to ride this horse, who has had a bad jumping experience with the first rider and also wasn’t able to work through getting over that last jump.

Some might think that this horse was physically in pain or suffering from some type of injury. We don’t know that but if you are horse savvy at all the horse wasn’t showing any signs of being physically unfit or injured. It’s believed it came down to an awful jumping experience, pulling whole fences down, hitting rails, riders flopping around on his back, not to mention a lot of unsafe riding that resulted in lots of riders falling off. However, In the rider’s defense, they only got 20 minutes to familiarize themselves with the horse, and that is part of the challenge, but for the safety of these horses and these riders, it would be much better if they could have a lesson the day before. It would also be a lot better if the horses were assigned to one person which would mean they need more horses, but that would be a lot fairer for the horses and riders.

Unfortunately for Annika, St. Boy was not as forgiving for her. If horses could talk would say “I can’t do this, I’m not forgiving you for this and I’m not jumping anymore”. The horse in my opinion and I think in many others, the horse has every right to do that with the way he was being ridden.

Some of the horses, we must give kudos to. They are amazing horses who kept trucking along, despite poor riding. Whether it is poor riding because these riders are not seasoned horseback riders, or because they only had 20 minutes to get to know the horse. I could speak from experience if I only had 20 minutes to get to know a horse and then had to jump a meter 20, that would take a lot of nerve. If you check out the Harmony Horsemanship YouTube channel (or click the link at the beginning of the blog), you will see what I am talking about https://www.youtube.com/user/682740. You will see one riding going through a combination while holding onto the horse’s neck as the horse is jumping the fences. I have no doubt that is Annika drew that horse, she would have stayed in that gold medal spot simply because that horse was much more forgiving and continued to jump even after the rider had her arms wrapped around his neck, holding on to the horse trying not to fall off as they go through the triple combination.

I think many people including myself feel bad for Annika. She trained hard, she had put herself above everybody else in the other events, and then got pulled down purely on the fact that the horse she drew in the competition was not as forgiving as the other horses and was ridden poorly before she even got on which made her chances very slim.

There is also a lot of controversies around the coach that was at the sideline. The horse was backing up into the fence, refusing to go forward, the coach somewhat punches the horse or bumps it in the bum; now because of that the coach could potentially be banned or receive a penalty or suspension from the sport. This consequence may be extreme. If you watch the video footage it’s a bump on the backside of the horse which in most cases would not be considered animal abuse. And if you know what Harmony Horsemanship stands for, then you know that HH is a huge believer in horse welfare and using positive reinforcement to build a better partnership. However, she should not have interfered with what was going on in the ring; if you compare that to what Annika was doing with using excessive cropping and spurring, the tiny little bump is absolutely nothing in comparison.

It will be interesting to see if anything comes of this, and unfortunately for the sport, it has blown up. Regardless we need to look long and hard at this, and we need to look at what is going on. This is the Olympics, with the best of the best, young people are watching this aspiring to do what these athletes are doing, and then you have seasoned riders embarrassed for these riders who are making a mockery of the time and effort these riders put into this sport.

So how can we make this better? How can we make it fairer for both horse and rider? Those are my final thoughts; I hope you found this interesting, and I would love to hear your thoughts. Leave us a comment below or on our social media https://www.facebook.com/HarmonyHorsemanshipTM and let us know what you think about the Pentathlon and how this sport could change or improve or if you even think it doesn’t need to change or improve, we would love to hear from you.

Remember you can always check out more great free resources and other information at https://harmonyhorsemanship.com/ or check me out on my website https://www.lindseypartridge.com/.

Thanks so much, bye for now.