Dreamer behind the scenes of Unbridled 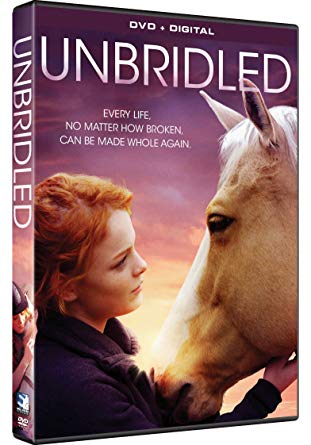 Have you ever watched a horse movie and thought, wow I’d love for my horse to be in a movie? Or I wonder what it’s like to be the horse wrangler on a movie set?

Let me share with you a behind the scenes peak at filming a horse movie.

In February I traveled down south to North Carolina with two of my horses – Dreamer and Soar, along with one of my students to help me. You may have heard about Soar, she is America’s Most Wanted Thoroughbred 2015. For Dreamer, this was his first major event. We were happy to head south. We live in Ontario and can have some really cold winter days, so we were excited to be in above freezing temperatures.

Unbridled is a story based on a real ranch called Corral – a place that helps abused and assaulted girls to heal through horses. It’s a family film inspiring the message that any person can be made whole again. It’s release date is not set yet, but should be early 2017.

We were involved in the early stages before the script was final – originally the horse’s name in the film was going to be Waldorf. When we told them the horse’s name playing the lead role is named Dreamer we saw the name changed on the next script – I guess they liked it!

We arrived two weeks before filming so we could meet with the producer, get the lay of the land and visualize the stunts they needed us to perform. We also set up a lesson for the lead actress with Dreamer so they could get to know each other.

The list was pretty long of things Dreamer needed to do including:

Now if you are wondering how long it takes to teach a horse to do these things, well it depends on a few things. Trust and understanding is key – paired with a desire to please. In Dreamer’s case he loves molasses cookies so we always had cookies for him after each take – it’s only fair he get his pay cheque too.

We practiced for two weeks training Dreamer the various things he needed to do and mixed it up with trail rides and some fun so he wouldn’t get bored. Soar practiced for her scenes which needed some liberty and bridleless riding. Then the filming started.

Our first night of filming

Our first night on set was literally at night. We were filming night scenes and needed to trailer Dreamer to a different location because we were filming a scene with a road. We arrived at dusk to a fairly remote location with forest and fields all around. We had never been there before and it is a completely open area with no fencing. Dreamer’s scenes:

Not too difficult for a first night in the movies right?

Luckily Dreamer was well prepared and very trusting. We had enough time that Dreamer could practice a couple times before filming, and he also had time for lots of breaks. A lot of the time is waiting between takes, or during scene set up because each scene is at a different location and there are different angles filmed for each scene.

Think about it when you watch a movie or tv show – there is usually a wide angle that captures all the characters in the scene, and then there are usually close ups of each character. Each one of those angles is filmed separately – it’s not possible to get all of the angles at the same time because then you’d probably have cameras getting in the background. Now consider that every time you change an angle you have to typically do a lot of set up – changing lighting, fog machine, camera equipment, and move the entire crew out of site of the new angle too. That’s why there is a lot of waiting on movie sets.

Dreamer passed his first night of filming – it was a long one and we got back to the farm as the sun was rising. Time for a long nap.

We had a couple more all nighters of filming doing various night time scenes – the interesting part is that it was actually harder to film at the farm then when we were offsite. When we were at the farm Dreamer knew where his girlfriend (Soar) was so it made the liberty scenes a little more challenging when out in the open areas… there were a couple times that he tried to sneak off for a late night snuggle with Soar.

Cameras really do make a difference

One night we needed to film him jumping out of the riding ring and running through a forest. It was really spectacular to see how they use the fog machine to create the perfect effect. I remember watching Dreamer perform his stunt and then seeing the replay on the camera and thinking ‘wow, I was just here and I swear it didn’t look that good in real life.’ It’s amazing the quality of the cameras and look they can achieve.

Everyone had to get their energy in check

Another night we needed Dreamer to jump a fence at liberty, but Dreamer was tired so he kept knocking the rail (don’t worry it fell easily and didn’t hurt him). I ended up asking all of the crew to shout ‘3, 2, 1, jump!’ to give some extra energy in the air – and voila he cleared the fenced. Horses really feed off of our energy and if we are getting tired, frustrated or tense it passes on to them. Changing our energy and emotions to be positive, fun, and energetic also transfers into the horse.

One of the saddest scenes we had to film was Dreamer getting upset and being left behind. We needed it to look real so we let Dreamer hang out with Soar and a lot of the crew. Then we all left leaving Dreamer behind. That was a hard one to film because I felt awful making him feel left out. It was only for a few minutes and then I went right back and gave him kisses and cookies.

The most challenging scene to film was when Dreamer needed to stand on a specific mark, and wait for a cue to do a 180 pivot and dash across the ring to the other side. It was challenging because Dreamer is an over achiever and once he knows his task it can be hard to get him to wait for the cue, but also it’s difficult to get a clean 180 pivot from a horse that is at liberty, while you’re about 50ft away hiding behind a bush so the camera (and horse) can’t see you. It took about three tries and then we had perfection.

Go figure the day that Soar needed to film her liberty and bridleless scene it was the hottest day yet. Soar being a Canadian horse was less than impressed with the heat. I woke her up from a sun bathing nap, had to drag her inside to get a bath. Thank goodness for Espana Silk Grooming supplies because grey horses always seem to find creative ways to get dirty. Then we had a bit of time to practice. The film crew set up and it was time to film. She didn’t want to do anything. She had zero energy. I joked to the crowd my Canadian horse wasn’t used to the heat and everyone laughed. I ended up doing her stunts in pieces rather than one flowing routine. She ended up doing everything I needed, just not with the enthusiasm and speed that I’m used to.

The most rewarding scene was one we didn’t practice for because the whole vision of the scene didn’t become clear until we were just about to shoot it. Dreamer was to walk up to the actress at liberty, she would stand up on a stump, and Dreamer magically rotate into perfect position for her to jump on and then ride off together (with no equipment) – oh yeah, and it’s a wide angle shot so I had to stand way off to the side to give the cues. Luckily Dreamer is a dream and he did it perfectly getting the scene on the first take – wow that was rewarding.

The only scene we couldn’t do was probably one that you would think is the easiest. Dreamer was supposed to walk up to a ledge and eat an apple. That’s it. Except after about 12 takes of knocking the apple off the ledge we gave up and modified the scene so the actress can give the apple to Dreamer instead. Who would have thought out of the long list of demands that was the most challenging?

Filming a movie was incredible – everyone was so friendly and supportive, the days were full with a lot of waiting, but it all builds up to something beautiful. I love that I got to spend so much time with my horses and I was challenged with things I would never normally try. I can definitely say I will do it again.

Look for Unbridled and the movie trailer at www.facebook.com/Unbridled